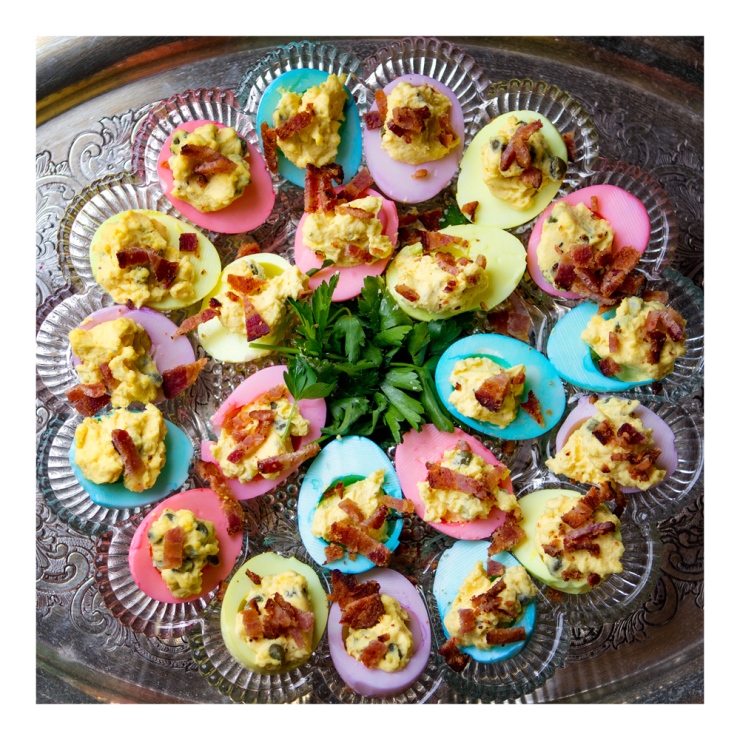 It seems whenever I take cooking into my own hands, things go awry, no matter how closely I follow the directions.  Such was the case yesterday when I decided to make some simple Deviled Eggs.

My kids are grown now but they still come over for all the major holidays and birthdays.  I don’t color eggs anymore and I kind of miss that little ritual.  However, I found a nifty little trick of coloring the egg whites after they are cooked and shelled and thought that would be a fun thing to do.

I followed a recipe for hard boiling eggs exactly (eggs-actly) and was quite proud of myself for not veering off the recipe like I am known to do.  I proudly cracked the first egg and…the shell was stuck firm to the egg.  As I began to pick off the shell, pieces of the egg white came off also until there was very little egg white left.  Stupid egg, I thought, and began to peel another with the same results.  Nooooooo!

Oh, yes.  Every single eggshell was stuck like glue to the egg white.  I ran water while I peeled and groused to Yes! Chef! that this is what I get when I don’t let him take charge of all the cooking.  He wisely did not make any comments.

But, I soldiered on.  I found a great recipe for the stuffing that included capers.  It was quite tasty and almost made me forget about the battle-worn egg whites.

Then, I dipped the egg whites in some water and neon food coloring with a little vinegar.  They did look pretty but the dye brought out some of the flaws.

But, as long as everybody looked at the eggs from the top down and not from this point of view (side), they looked quite pretty.  And then, the one thing that would make everyone forget about the fact that the eggs looked like they had escaped from the garbage disposal…BACON!  Yes, bacon makes everything look and taste better.

The eggs turned out to be a great success taste-wise and a conversation starter looks-wise.  Maybe this will be a new Schmautz Haus tradition.

Here is the recipe.  It is from Food For My Family:

Cleanly slice the hard-boiled eggs in half. Pull the egg yolks out from the center and place them in a medium-sized bowl. Mash the yolks with the tines of a fork until smooth. To the egg yolks add the cooled caramelized shallots, mayonnaise, Dijon, tarragon, capers, caper brine, and white pepper. Mix until smooth. Pipe or spoon the yolk filling into the hollowed out egg whites. Garnish the eggs with the crisp ham and fresh tarragon leaves.

Refrigerate until ready to serve.

Copyright © Food for My Family.