A couple of months ago we were contacted by a cookware manufacturing company called Magefesa, located in Florida.  They had somehow read our blog and wanted us to test some of their cookware and then review it on the blog.  We were very happy to oblige and they sent us a complete set of their Ecotherm Plus cookware, a lovely pressure cooker and a set of frittata pans.  Several weeks later we arrived home to see this on our doorstep.

Yes!Chef! was quite excited by this stroke of luck.  And set to work experimenting with them and then searching for recipes which would highlight the flavors of the Mediterranean and the features of the pans.

Here are his initial observations.  The pans are called Ecotherm Plus and are constructed of stainless steel and designed for waterless cooking.  They feel substantial and sturdy. The pans can be used on our induction cooktop and our electric cooktop.  Even the non-stick frittata pans can be used on our induction cooktop.  This is a bonus because we haven’t found non-stick pans that we have been able to use with our induction cooktop.  (The induction cooktop uses magnets to heat the pans, so the pans must be attracted to magnets.  Don’t ask me about all the gobble-de-gook and science that makes it work.  You can look it up.  All I know is that the induction process heats the whole pan, rather than heating  just the bottom, enabling the pan to get hotter faster and cooks more evenly. Also, you can place your hand on the cooktop, turn it on and it will not heat up unless you have a ring or something else on your hand that is iron or steel. ) 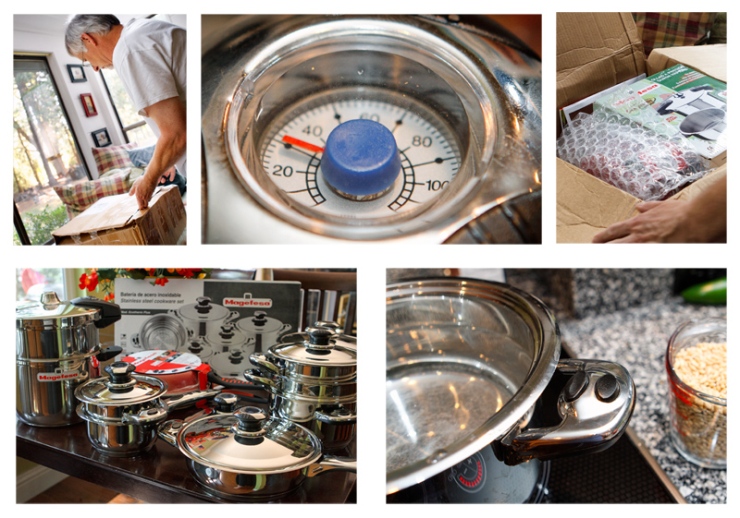 The handles of the cookware stay cool while you are cooking with them so you don’t have to hunt around for pot holders.  The tops have little thermometers built in so you can see the temperature of what’s inside without lifting the lid (the pans we got were made in Spain, so all instructions were in Spanish and the temperature gauge is in Centigrade instead of Fahrenheit.  Nevertheless, it’s a cool device.)  The frittata pans are two 9″ non-stick pans with stay cool handles.  They come apart and can be used separately.  I have used these little beauties numerous times and they clean up wonderfully.

This weekend he finally had a chance to sit down and find some recipes that would be both Mediterranean style cooking and healthy.  He came across a book we had in our shelves called, “The Sonoma Diet”, which has numerous recipes that would fit the bill.  He decided to make Latin Spiced Pork Tenderloins, Toasted Barley Pilaf and Brussel Sprouts with Prosciutto.  (He loves Brussel Sprouts and will take any occasion to cook them.)

You can see in the above photo that Yes!Chef! and I are both very serious about doing the necessary prep work before starting to cook or shoot. His prep work is on the left, and mine is on the right.  (I also had to set up my photog stuff, but the wine was important to my general feeling of well-being so that I could get great pics!  Ha.) 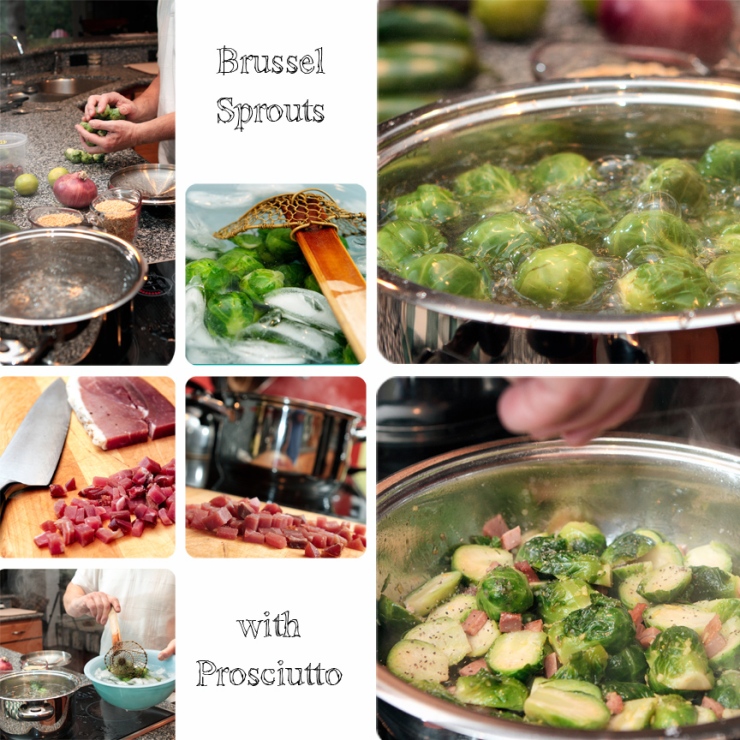 One of the things people notice about his vegetables when they are served is that they remain a lovely shade of  bright green.  The secret is to blanch them in salty boiling water and then immediately dump them into an ice bath.  After they cooled a bit, he cut them in half and threw them in the nice size 9″ Ecotherm saute pan.  Then he cooked them until they were tender. The pan worked very nicely and cooked evenly.

Yes!Chef!  likes to go to the butcher in the grocery store to get his meat rather than buy the meat precut and prepackaged.  This way he gets exactly what he wants.  In this case, he stopped by the deli case to get a nice piece of Prosciutto.  Generally, the Prosciutto that you find prepackaged in the deli case is sliced paper thin, which is great for pizzas and the like, but Yes!Chef! wanted good size chunks of the meat in this dish.  The deli assistant was able to give him a nice piece of meat in the exact size that he wanted.  So, don’t be shy about talking to the people behind the counter.  You don’t have to settle for what’s already been packaged.  Here’s the recipe for the Brussel Sprouts: 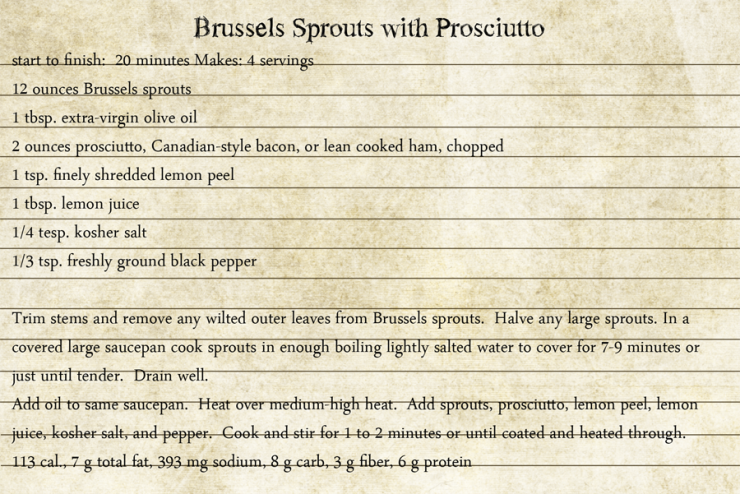 Y!C! used the two 9″ frittata pans to cook the two  pork tenderloins.  He used one of the pans on our electric ceramic stove top and the other pan on the induction cook top.  We were very curious about the browning ability of these pans.  Y!C! loves his heavy black iron skillet to brown his meat and hates to give up that piece of equipment.  (Next to his Weber, that is his favorite way to cook meat.)  However, he was game to try the Magefesa pans.  These pans are nice because they do the job without adding a lot of oil or fat.  Yes!Chef! did not add as much olive oil as he would have added to his iron skillet and the pans gave him a very nice caramelization on the meat.

He used his meat thermometer, of course, removing the meat at a temperature of around 155 degrees.  Then he let it rest.  As it rests, it continues to cook, so do not leave the meat in the pan or the oven (whichever way you choose to cook the meat) until it is 165 degrees because when you remove it and give it the EVER SO IMPORTANT resting time, it will be overcooked and dry.  And dry pork is not something you want to serve.  PTOOEY to dry pork!

As the meat was cooking, we did have several visitors into the kitchen.

Not to be outdone by the young Master, Obie stood by the kitchen door, safely on the slate floor because he thinks the wood floor in the kitchen is too slippery for him to walk on.  And, whoever trained him (we got him from a shelter as an adult dog), trained him not to enter the kitchen.  But, he does know how to turn on the charm and stamp his feet so that he will get noticed.

He doesn’t get table scraps, but Y!C! did mix in a few pieces of cooked Prosciutto into his food.  Don’t bother telling us how bad it is for the dog to eat people food.  A few pieces of meat now and again are okay.

Here’s the recipe for the Pork, again from “The Sonoma Diet”, by Dr. Connie Guttersen, R.D., Ph.D

1.  For rub, in a small bowl combine chili powder, garlic powder, oregano, kosher salt, black pepper, cumin, and cayenne pepper.  Sprinkle rub evenly over all sides of meat; rub in with your fingers.

2.  Place meat on a rack in a shallow roasting pan.  Roast in a 425 degree oven for 25-35 minutes or until an instant-read thermometer inserted into thickest portion of meat registers 155 degrees.  Cover meat with foil and let stand for 15 minutes before slicing.  The temperature of the meat after standing should be 160 degrees F.

Finally, Yes!Chef! added some grain to the meal.  We don’t often have grains or starches with our everyday meals because we are both trying to keep our carbs low.  Both of us suffer from reflux and find that cutting back on grains and potatoes and rice helps this particular problem.  (I hate getting old.)  He chose a recipe, again from The Sonoma Diet, called Toasted Quinoa Pilaf, but he substituted barley for the Quinoa.  I hesitate to put this recipe in this blog post because it did not turn out well.  It was not the fault of the cookware, but it was the fault of the recipe.  The cookware did an excellent job of cooking the barley when we cooked it about 6 times longer than called for in the recipe.  It was good, but we ate it separately from the rest of the meal because the rest of the meal was done long before the barley.

Here’s my recommendation in regards to cooking barley…read the instructions on the bag.  It takes way longer than 10 minutes (which is what the recipe called for).  Chop up some shallot or onion and some garlic and saute them in some olive oil in  the saucepan until they are tender.  Throw in the barley and cook and stir it around for about 5 minutes until barley is slightly brown (toasted).  Stir in the necessary water or broth (we used broth), a little fresh herbs and a couple of bay leaves.  Then, put the top on and cook until tender.  It’s a nice way to eat barley.  Barley is a little chewy and nutty tasting.  It has a little fiber, also, to counteract the carbs (for those of us who have issues with those types of carbs.) 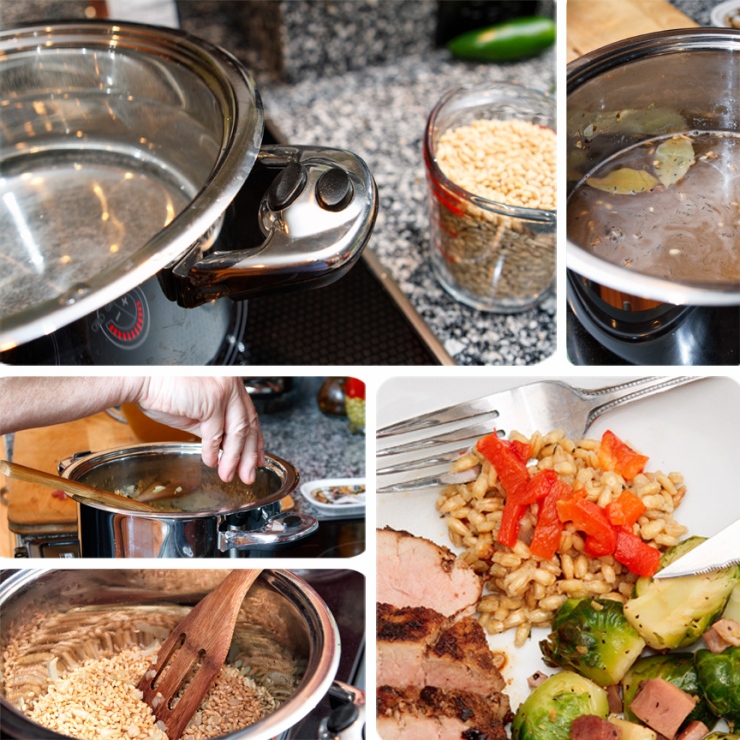 PS.  The recipe called for bottled roasted red bell peppers, which are expensive and they are packed in oil.  It’s easy to roast them at home and they taste better. Y!C! roasted one red pepper in the oven at 450 degrees until it was slightly charred, dropped it in a paper bag for a bit so that the skin would loosen up, skinned it, chopped it and Voila!  No oil, or stale taste.   It doesn’t really take that long and it’s not difficult…just keep your eye on it.  It is way cheaper and much better tasting.

All in all, the pans worked great…Y!C! was very happy with the way the food came out.  The pork was perfectly cooked with a really nice spicy and caramelized crust.  The Brussels Sprouts were tender and the prosciutto was chewy and smoky tasting.  I wish the barley had been done at the same time as the rest of the meal, but because the recipe was off, the barley was not done.

We are anxious to try out the pressure cooker, but we have yet to find a good summer recipe.  Stay tuned.