Yesterday somebody mentioned fish tacos somewhere.  Or maybe I read about them on-line.  Or perhaps I dreamed about them.  Anyway, I had a terrible craving for fish tacos and I was able to talk Yes!Chef! into making them for me.  I also just happened to find a recipe for shrimp tacos in the latest “Fine Cooking” mag. So, really, it was kismet that we should make them.

We are spending the long weekend in Lake Tahoe and we woke up to snow.  I pronounced it perfect weather for shrimp tacos and we headed out to the store and on the way there, we stopped in the forest to take Obie for a walk. 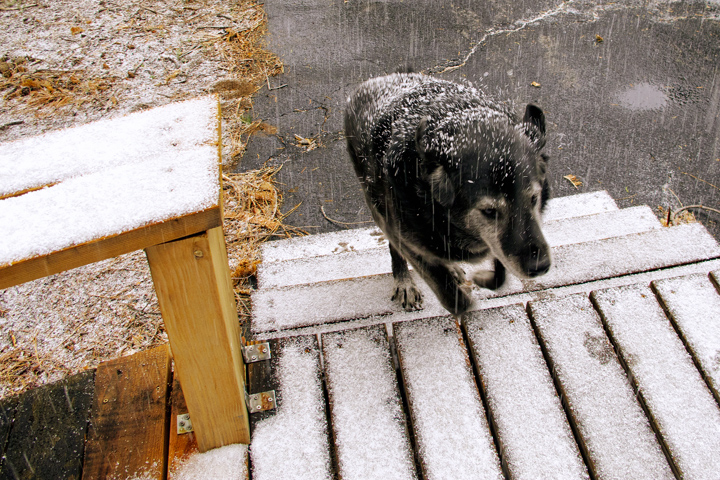 Obie loves his walks and the snow does not stop him from encouraging us to walk with him. After our walk we headed down to one of the Groceries that we frequent when we are here in Tahoe.  It was typical Lake Tahoe Holiday crazy.  Some people clogged up the aisles while they were texting and talking on the phone.  Others stood in the middle of the aisle while they perused what was available.  Still others chatted with their shopping mates or others that they happened to meet…also in the middle of the aisle.  And lastly, but more harrowingly, there were more than several people who weave crazily around the middle-of-the-aisle-dawdlers barely missing other crazy weavers. I’m just saying that sometimes you take your life in your hands when you go to the grocery at Lake Tahoe between the dates of Memorial Day to Labor Day.  Consider this fair warning. However, it was well worth the challenge because it was $5.00 FRIDAY!  So, we found raw shrimp for $5.00 per pound.  I told you making shrimp tacos was kismet. We also found sweet corn on sale: 10  ears for $2.00.  And it was nice and sweet.  How’s that for shopping the sales?

Yes!Chef! decided to make a spicy sweet corn side dish because of  great deal on sweet corn.  He par-boiled the corn in very salty water for about 2 minutes.  The highly salted water infuses flavor into the corn.  It does not make the corn taste salty, but it does bring out the inherent sweetness.  Do not be afraid to par-boil your veggies with lots of salt in the water.  (And, properly season your food as you are preparing it. )   We also got several jalapenos, which Yes!Chef! chopped up along with a red onion.  Try to make your chopped veggies as uniform as possible so that they will cook evenly.

The lovely shrimp were shelled and deveined so there was nothing nasty left in the shrimp.

Then Yes!Chef!’s magic cooking process began (she waves her hands in the air like she has a magic wand.)

And Voila!  Shrimp tacos with cabbage and yogurt sauce with spicy sweet corn side. 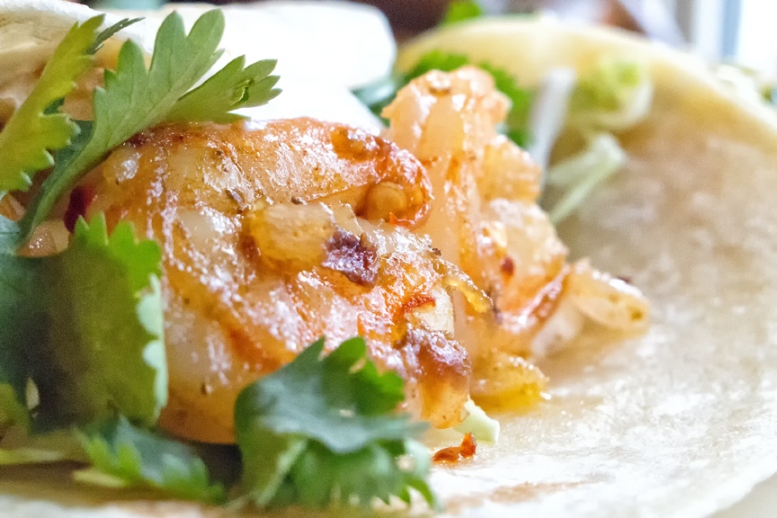 We substituted Greek yogurt for sour cream. Yes!Chef! gave the yogurt a couple of squeezes of lime before he mixed it up.  The lime and yogurt added a really nice tang to the dish.  The yogurt made your mouth feel like it was eating sour cream, but it wasn’t nearly as rich.  The cabbage added a great crunch.  Do not forget the cabbage.  It is an important part of any fish taco.  If you don’t like it undressed, then mix it with the sour cream or yogurt sauce before you put it in the taco. 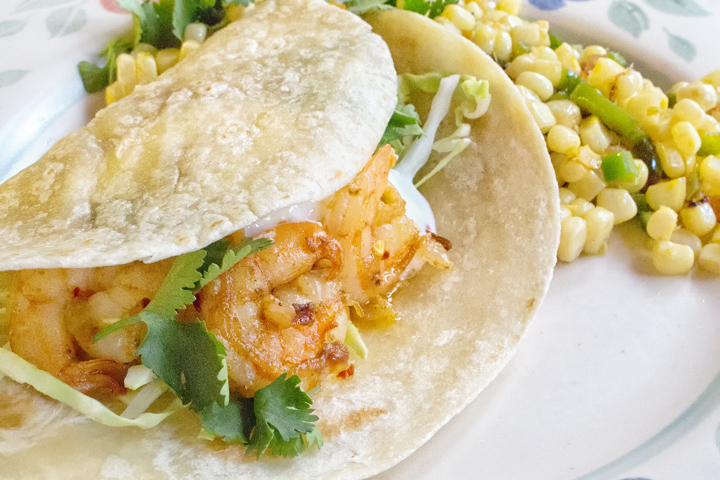 The corn side dsh was quite spicy (Yes!Chef! said he probably should have used only 1 jalapeno instead of two.)  I thought it was pretty spicy, too (although I’m kind of a hot spice wimp), but it was not too spicy for me to eat.  The sweetness of the corn counteracted some of the spice, so I had no problem eating it.

Yes!Chef! says he would recommend a good light (colored) beer like a Tecate or, if you prefer wine, enjoy a sweeter white wine like a  Riesling or even a Sauvignon Blanc.

Even on a cold “winter-like” day, Shrimp Tacos will make your heart sing.

And, of course, here are the recipes:

Meanwhile, finely grate 3/4 tsp zest from half of the lime.  Cut the lime in half and squeeze the zested half to yield 1 Tbs. juice.  Cut the other half into 4 wedges.

Heat the oil in a 12 inch nonstick skillet over medium heat.  Add the onion and cook, stirring often, until translucent, 2 to 3 minutes.  Raise the heat to medium high and add the shrimp, the remaining 3/4 tsp. coriander, the cumin, pepper flakes, and 1/4 tsp. salt and cook, stirring constantly, until the shrimp are cooked through, about 2 minutes.  Add the lime juice and remaining zest and stir to coat.  Remove from the heat.

Put some of the cabbage, cilantro, and sour cream on each tortilla and top with the shrimp.  Fold in half and serve

immediately with the lime wedges on the side.

3 ears corn, parboiled in salty water for about 2 minutes.  Cool and remove kernels

salt and pepper to taste

Heat skillet on medium high with 1 tablespoon oil and sweat the onions and jalapenos together. Add the garlic and sautefor about a minute.  Add corn, heat through and remove from heat.  Stir in zest and juice and season with salt and pepper.

Serve it while it’s hot!

I do have a PS (Photography Share) with this post.  I decided to use my Canon G12 Point and Shoot for all the photos and I did not use a tripod (don’t tell my food teacher) just to see if I could take satisfactory food shots with a fairly decent point and shoot.  I think the photos will do, but they are not as sharp as I would have liked and because I used only ambient light (the light that is available), my camera upped the ISO and so increased the noise.  But, this little experiment shows that you can make some nice photos with a point and shoot if you are careful, brace your arms and camera on something very solid so as not to shake your camera and TURN OFF THE FLASH! I prefer to shoot with window light, but you can see that the cooking pictures have a slight yellowish color to them because of the mixed lighting that is available in the kitchen.  Yuk, but it does illustrate the cooking process.

Here’s a little bit of the remaining winter in Tahoe (where the weather is never predictable).

9 thoughts on “Shrimp Tacos or Can We Pretend it’s Almost Summer?”