Yesterday, we awakened to snow.  It wasn’t a lot at first and there was still a little snow on the ground from the day before.  But, as the day progressed the storm increased and the snow continued to fall all day until we had almost a foot of snow. The Sierras have been suffering this winter from lack of snow and when it doesn’t snow we worry about having enough water in the summer and, since I live in the forest, we worry about fire.  So, the snow was a welcome relief.

I thought it would be a grand idea to have hot oatmeal for breakfast since oatmeal is a warm and comforting food.  I served it up hot to Yes! Chef! but by the time I got done photographing my portion, it was a little on the cool side.  Luckily the microwave warmed it right up.

Yes! Chef! enjoyed the oatmeal and we began talking about comfort foods, especially when it’s cold outside.

Yes! Chef! was reminded of a small pork roast we had in the refrigerator and thought it would be good to cook it up.  He had to take the youngest son to work, anyway, so he thought he would stop at the store and get the necessary ingredients for the roast. So, they bundled up and hit the road.

I still had oatmeal on my mind, so I suggested that he pick up some raisins for some oatmeal cookies.  I had not made cookies in a very long time and it sounded so good.  Yes! Chef! does not like to bake, so he was glad that I was willing to make cookies.

While he was gone, it continued to snow and when it snows out here in this neck of the woods, the power always goes off.  Sometimes for hours and sometimes for days.  Sure enough!  The power went off, probably for several hours.  This year we were prepared, though.  We had invested in a generator that powered the lights, computer, tv and most of our kitchen.  We now laugh in the face of power outages where before, we cowered in fear every time it snowed or rained heavily.

Yes! Chef! finally arrived at the homestead and was happy to see that the generator was humming happily away. 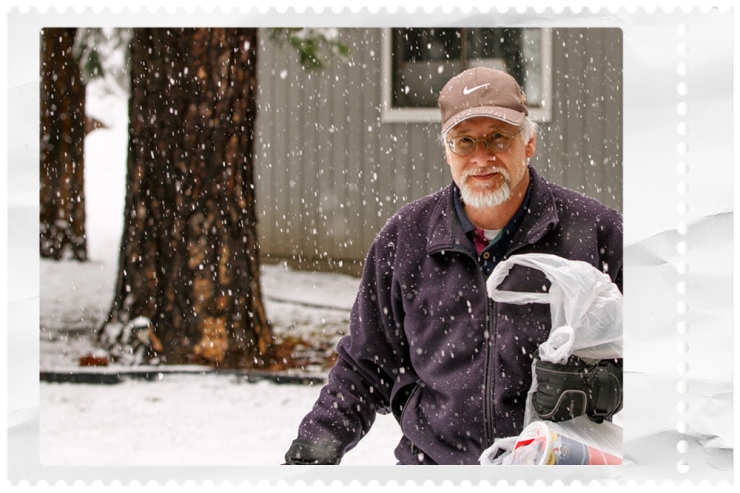 Although our oven is not run by the generator, our microwave does convert to a convection oven, so I was not worried about baking the cookies.

Yes! Chef! found a couple of older movies to watch through Netflix and he settled in to watch while I was able to make the cookies and watch the movies also.  It was so nice not to have to worry about the power situation.

I whipped up the ingredients, which made a very stiff batter. The recipe says to drop by rounded tablespoons, but I ended up rolling the dough into loose balls because it was less work than spooning them out.

By the time I was ready to cook them, the power had returned, so I was able to use the oven.  I must say, they looked very homey and charming. 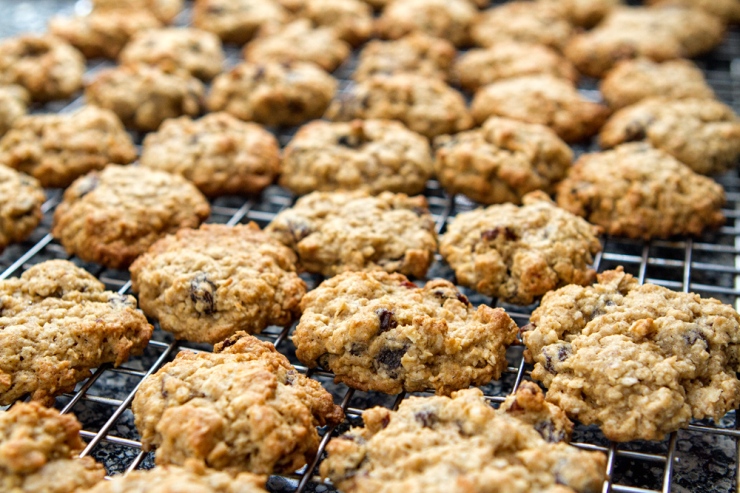 The recipe made a bunch, but they were small. Yes! Chef! and I both had a few and then I placed them in a plastic bag after they cooled so they would stay fresh.

“Where did I get the recipe?” I heard someone ask.  Well, I am a huge fan of recipes coming from “the back of the box” or bag or some other part of the package.  I believe that these food companies spend lots of money perfecting their “Back of the box” recipes so that you will buy their particular product. Plus, why reinvent a perfectly good cookie recipe?  This little gem was hidden under the top of the Quaker Oats Box.  It was called “Vanishing Oatmeal Cookies”.  Here is the recipe: This morning I was thinking about Oatmeal again and I was about to make myself a nice hot bowl of oatmeal when it suddenly dawned on me that if it was okay to eat a bowl of oatmeal with milk and brown sugar for breakfast, why couldn’t I have a couple of cookies instead?  So, I gave myself permission to eat a few while I was taking these photos.

Now I know why they call the cookies “Vanishing Oatmeal Cookies”.  They are tender, chewy and not too sweet.  But keep them wrapped up otherwise they get stale pretty quickly.

You know what happens “If you give a mouse a cookie”…

11 thoughts on “It’s Cold Enough for Oatmeal or Can I have an Oatmeal Cookie for Breakfast?”