First, a little boasting.  We were notified on Friday that our blog was the July winner of “Food Stories Award for Excellence in Story Telling“. Back in May, 2012, I wrote a blog post that we had been nominated by Pop the Bubbly for the Illuminating Blogger Award.  I was quite excited (so was Yes!Chef!) because this award is not just about blogging recipes or showing pretty pictures of food.  It is about telling stories and not necessarily just about food.  I am all about telling stories…Just ask my children.

I checked out the competition several times since I was nominated, and they are a great group of bloggers.  In fact, I spent quite a bit of time perusing some of the entries.  But then, life got in the way and I kind of forgot about it until we got the notification on Friday morning that we had won.  Now, I can say:  Winner! Winner! Chicken Dinner!  Hazaah!

Thank you to Food Stories and to Pop the Bubbly!

In other news, I finally got the chance to get out of town and out of the heat and up to my beloved Lake Tahoe cabin. I had to leave Yes!Chef! and my youngest son behind because, well…if truth be known…they have day jobs and can’t just pick up and head for the hills like I can. My job as a photographer gives me a bit more flexibility. I had completed a recent photo shoot of some beautiful dancers and so I had plenty of work to edit.  So, I packed up the computer and the dog and off we went. 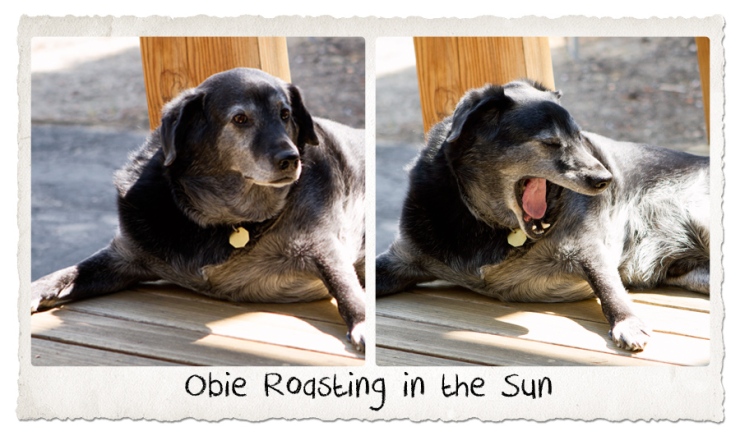 One of the biggest problems with being away from Yes!Chef!, of course, is not being able to blog about his cooking. (Aside from the fact that I miss him dearly.)  He did come up last weekend and I blogged a little about some pork chops that he made and I was going to wait until this weekend when he visited again before I blogged.  But, when I got this award, I couldn’t wait.  I also had a couple of things up my sleeve to blog about.

One of my favorite meals that Yes!Chef! makes is Roast Chicken.  I just can’t get enough of it.  We don’t have it so much in the summer time because it does heat up the kitchen.  But, it’s not nearly as warm in Tahoe as it is in the flatland (or even at my house in the mid-Sierras), which makes it okay to do some experimental roasting. 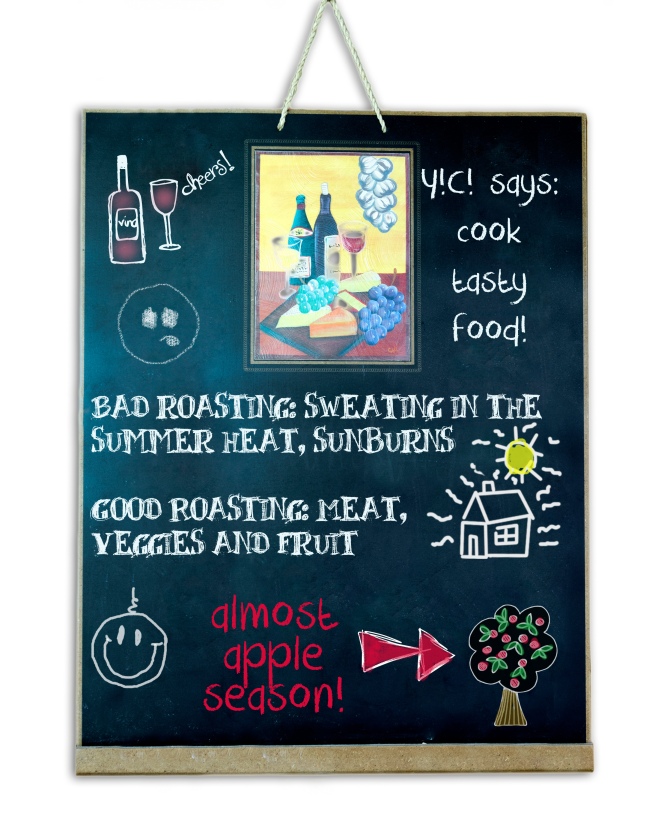 Roasting brings out great flavor in meats, many types of veggies and even some fruits. I started easy with some sweet potatoes.  I love sweet potatoes and I thought roasted sweet potatoes would go great with some Apricot Chipotle Sauce that I got at the Farmer’s Market. 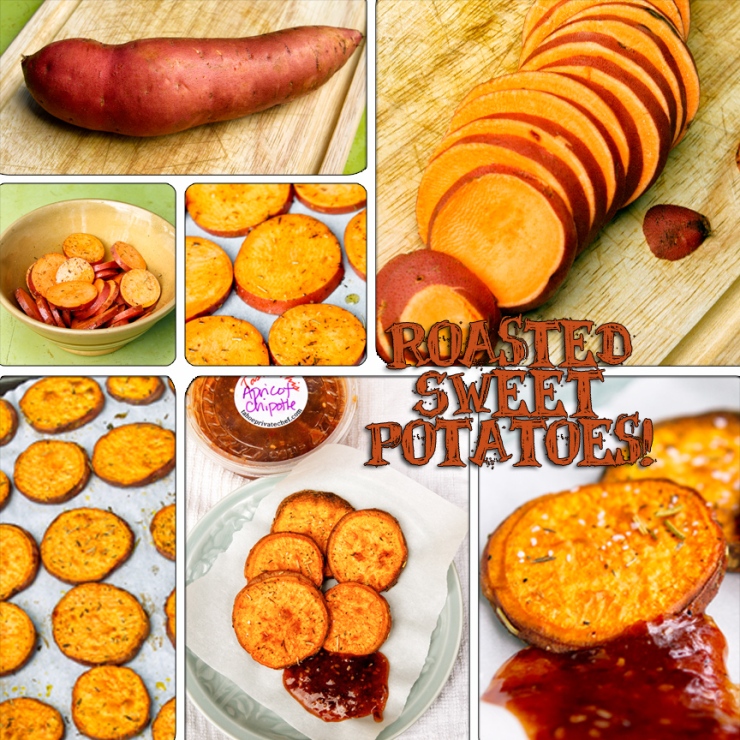 Here’s the deal with most of the veggies that I roasted. I sliced up the veggies and mixed them around with some herbs, salt and pepper and olive oil.  I heated up the oven to about 400-450  degrees, put some parchment on the baking sheet and laid the veggies in a single layer.  Pop them in the oven and roast away.  Check frequently (especially tiny tomatoes).  I roasted the potatoes for about 45-60 minutes.  Here’s a great recipe from Epicuruios if you don’t want to wing it.

Preheat oven to 450°F. In large mixing bowl, combine all ingredients and toss. Arrange potato slices in single layer on heavyweight rimmed baking sheet or in 13×9-inch baking dish. Place on top rack of oven and roast until tender and slightly browned, about 40 minutes. Serve warm or at room temperature, garnished with thyme sprigs.

The potatoes were sweet, spicy and the herbs added some depth of flavor.  They were great on their own, but the sauce was amazing.  I need to get that recipe.

Now, let’s deal with roasted tomatoes.  This was a learning experience for me.  I got a great bunch of beautiful cherry tomatoes in all sizes and colors at the Farmer’s market.  As a photographer, this seemed perfect to me.  As a roaster…not so much.

On of the things Yes!Chef! says is that you need to have similar sizes in whatever you are cooking so that it will cook evenly.  As a result of my improper tomato picking (chosen for the eye-candy), some of my tomatoes overcooked (I refuse to say that they were burned.)  The ones that were not overcooked were sweet and the flavor was intensified. Also, I could have removed the smaller ones if I had been paying close attention, but I became distracted by my crow photography (photographing shiny, colorful or pretty things) editing. 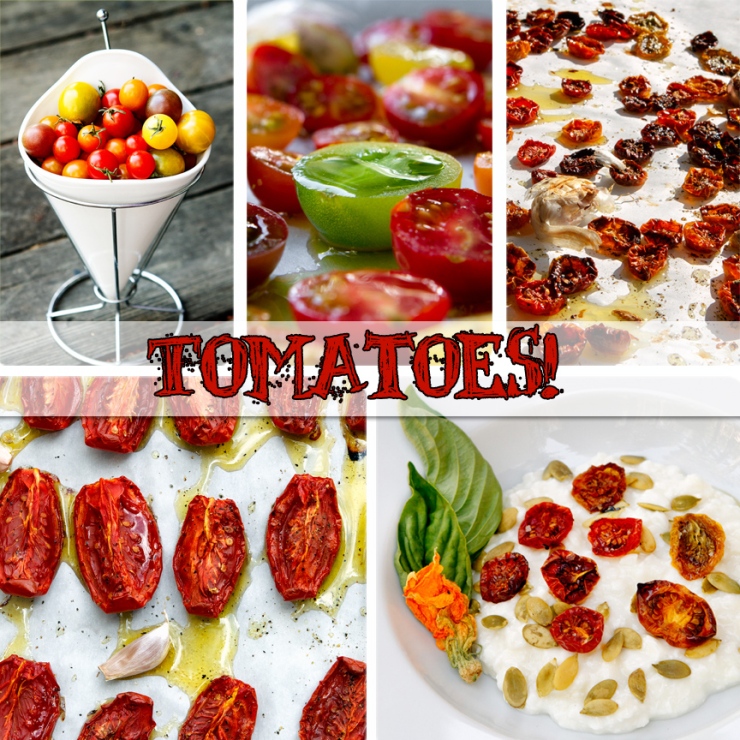 I did try the experiment again with Roma Tomatoes, sliced them in quarters and kept an eagle eye on them.  They were beautiful, juicy and intense.  In fact, Yes!Chef! used them on his pizza on Friday night.

He also put green olives, hard salami basil, Mozzarella Cheese and Parmesan Cheese.  When the pizza was done and resting,  he popped some halved  fresh cherry tomatoes on top to finish it off. 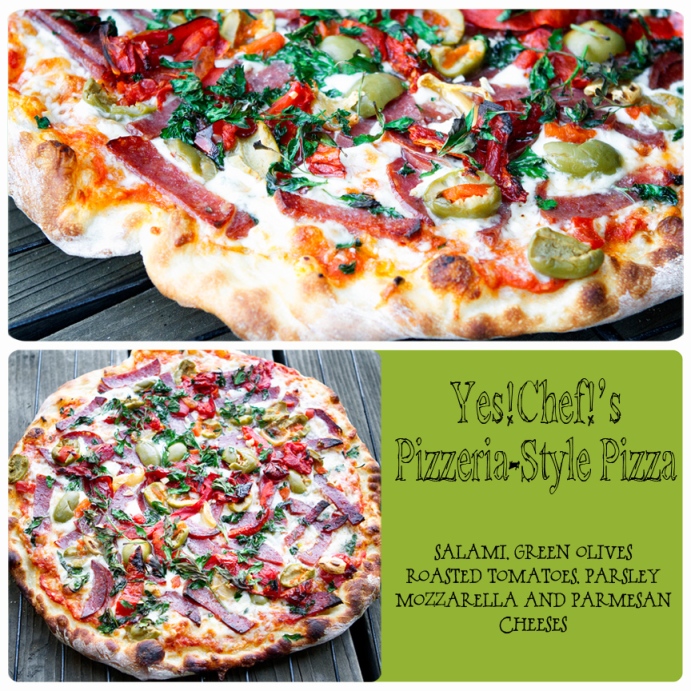 Oh, gosh it was good! The tomatoes were intense and extremely flavorful.  Yes!Chef! used the tomatoes to make his sauce and also put them on top of the pizza. 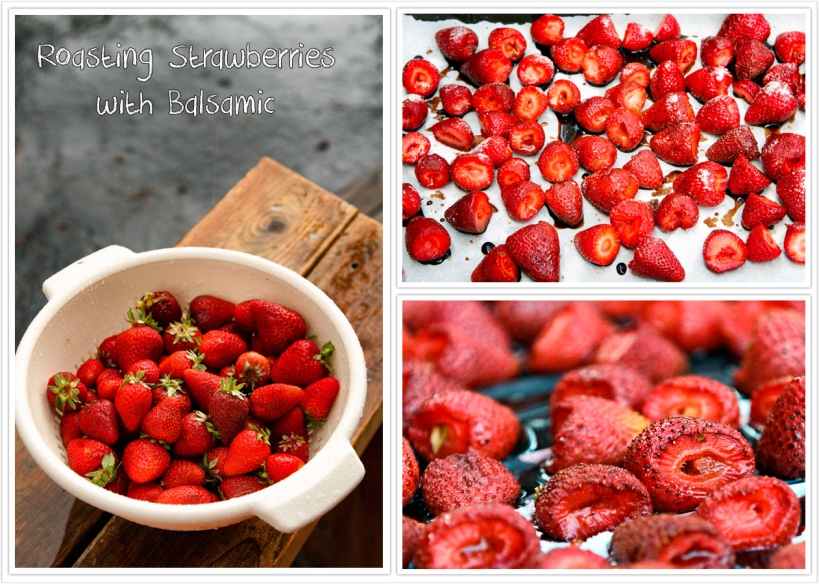 Fruit roasting is a little different than vegetable roasting, I think because of the water content. (I also roasted some grapes which didn’t turn out so well, but I think it was probably a cook problem rather than a recipe problem.) With the strawberries, I trimmed and hulled them and then I laid them on parchment lined baking sheet in a single layer.  Then I sprinkled them with sugar and  I drizzled olive oil and balsamic vinegar on top.  I put them in a 250 degree oven for about 1 hour until they mostly held their shape and the color was intensifed, but were obviously cooked.  The house smelled like strawberry jam!  The flavor was intense strawberry with a little sweetness from the balsamic.  I ate them plain.  I ate them on cottage cheese. I ate them on Vanilla Ice cream.  You can also put them in a sweet bread.  Lip Smackin’ good.

So, again, thank you to Food Stories for their outstanding award! Please stop by her blog…you won’t be disappointed.

Have a cold glass of ice tea and enjoy your roasted meat, fruit or veggies.  Cheers!

Remember:  Life is too short to eat crappy food.

6 thoughts on “A lot of roasting and a little boasting”